An introduction to Saul. 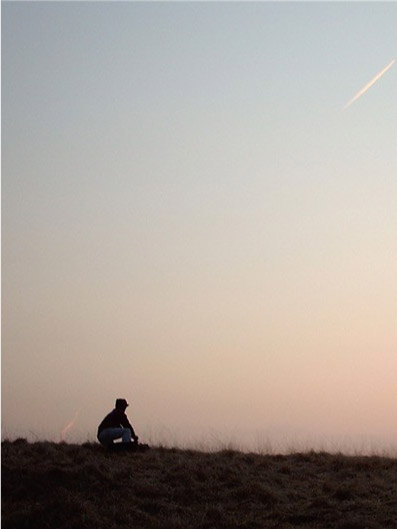 I paint directly from life and listen to my instinct.

Saul Cathcart grew up near the rugged coast of North Cornwall.

After completing an art foundation course at Falmouth, Saul went on to study at Winchester School of Art. He graduated in 2001 with a BA (hons) fine art degree in sculpture and returned to Cornwall.

At the same time he felt inspired to move away from sculpture and return to his real passion: painting.

He paints exclusively in situ, so he can respond to his surroundings directly.

When I go to a place to paint, I don’t want to just document it in a way we expect it to be recorded.

I want to express my emotions to parts of the coast I know well and respond to what is happening all around me, on that particular day.

I need my senses to be engaged so I can create something honest and meaningful.

It’s not enough to just say that my paintings are about feelings felt in situ – the painting has to convey this through the way it is constructed. The paint itself has to have life.

I work quickly and intuitively, which in turn gives the paint its own expression.

If you paint on location, then you are committed to making it work. Doing whatever it takes before the sun sets. This is sometimes challenging, but it gives me a focus that helps me create paintings I’m passionate about.

Knowing when to stop and leave a painting alone is something every artist has to confront and question.

If you don’t sort this out, then you are forever disappointed with the end result.

My work has to excite me, but I also want this to be relayed to the viewer. Particularly in the way the painting is constructed. So that when you look at a piece you hopefully not only feel what I felt at the time it was created, but you also get an understanding of how it was made.

When I paint directly from life and listen to my instinct, a chaotic yet logical rhythm starts to reveal itself in front of me. As if every mark I make starts to capsulate what I’m feeling and experiencing all at once.

I want to lose myself in this moment and not think about what makes a ‘good’ painting.

But after a while there comes a point where all of this energy starts to blur, as marks get muddled together. So when my brush suddenly stops and there’s a silence, I know it’s worth stepping back to see if I have something.

But does it hold my attention enough?

If I decide to continue then it has to be total commitment to the next stage, am I ok with losing what I already have?

I must have stopped for a reason.

This is the danger zone, where the brain starts to question itself. I just sit with it a while and if both my head and heart are happy, then I have a rare and precious thing in front of me.

There is something so positive about painting my local coastline. I know it, so it allows me to be free and confident when creating paintings in situ. Where I live helps define me and in turn my work.

When I return to places I have a connection to, it makes me realise that it’s important to keep things simple, to paint the paintings I want to paint, because what’s more important than painting what you love. 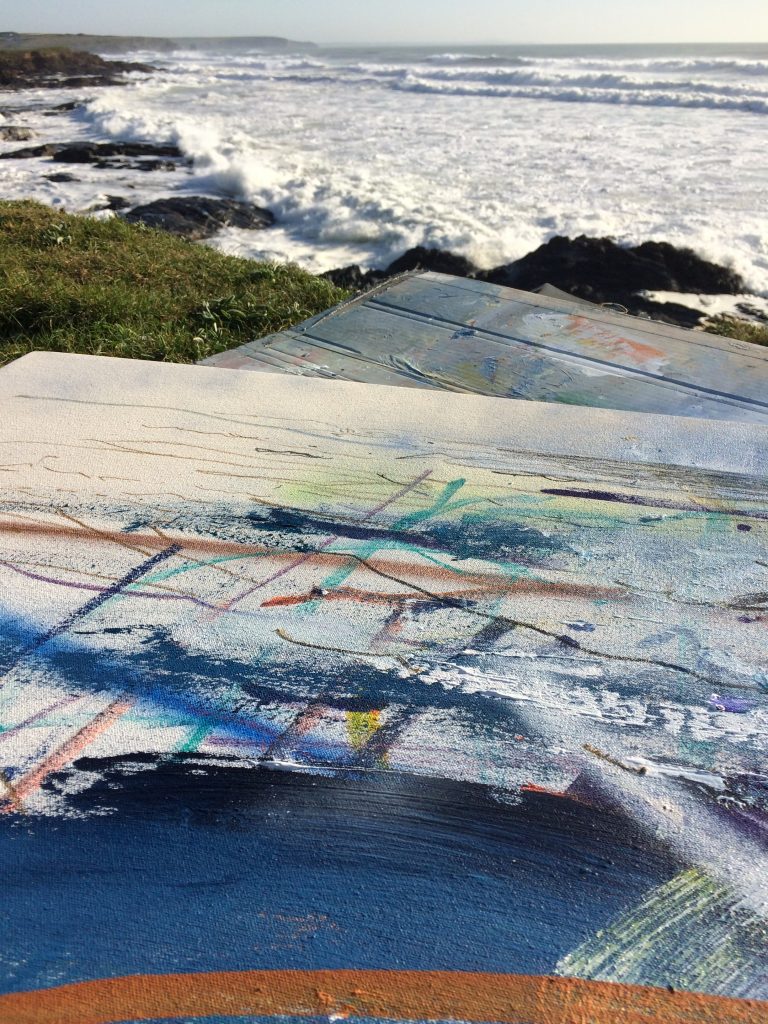 What others have written…

‘Saul paints on a grand scale – on large canvases, board and paper and using a mixture of acrylic, pastel, ink and pencil.

He also paints from the heart – his emotions tumbling onto the canvas. He says he has to be inspired by a place in order to paint it.’

‘When I went to meet him, he was carrying a canvas the size of a surfboard against a blistering Dartmoor wind.

It’s absolutely bucketing it down, freezing cold and fog is closing in fast.

And yet, with a grin on his face, Saul says: “There’s no such thing as bad weather… it just means you see things differently.”

And he’s right. On such a bleak day I expect him to be creating something quite dark and grey – but he’s working with bright pinks and oranges – picking out the colours of the gorse and fern.

Suddenly a gloomy aspect across Dartmoor seems like a hopeful prospect – full of light, colour and beauty despite the bitter rain and fog.

By looking at Saul’s interpretation, the beauty of the landscape becomes clear to me too.

He really likes the elements to play their part in his paintings, rain smearing the paint or the wind blowing it away.

He works kneeling on the wet grass, his canvas propped up on a mound – totally vulnerable to rain.

“I like the fact that part of it is out of control- sometimes a painting only just stays on the page.”

He doesn’t even mind the water dripping off my nose onto the work as I stand and watch – occupational hazard apparently.’

I ask Saul what kind of people buy his paintings.

“Do you know what’s really cool – everyone who I have met who has bought one says they’ve bought it just because they really, really like it.

“They’ve not necessarily got loads of money to spend on a painting, but something in my work has struck a chord.”

“It might be that I’ve captured a moment or a feeling from a childhood holiday, or simply that it’s an area that they really love. And that’s great.”

I am reminded of the best elements of the early nineteenth century British Watercolour School: the impressionistic use of colour and the strong sense of place that only comes from working in situ.

The moors and coastline are taken head on in the pictures with grains of sand left on a canvas that have been executed on a lonely strand. Rain showers and sea spray leave their mark on the work in Saul’s endeavour to connect with what he sees around him.

What at first viewing can seem like wild abstraction soon reveals its own logic and need to be included in the painting.

I would also argue that Saul’s years studying sculpture have given the landscapes an intriguing spatial awareness. This is evident in the sense of ‘middle distance’ that so many of the paintings convey and is particularly effective when set against the maelstrom of Saul’s abstract depiction of sea, sky and weather.’

There is something both refreshing and disturbing about Saul Cathcart’s exhibition. Refreshing, in a seaside town where much of the art is kitsch or quaint and provided with an obvious eye on the tourist trade. But disturbing? You know immediately that you have entered something different. This work is disturbing in a way which draws you back, engages and interrogates you. The works draw on familiar traditions which explore light and movement, and ought to feel comfortable. Instead they give rise to a sense of dis-ease; a discomfort which draws you in rather than repelling.

The title of the exhibition gives a clue to an early contradiction. Colour swirls in these canvases; the medium is the subject. There is only a nod towards the figurative in just the sketchiest of fashions. And then, to the side or in the distance of the picture plane, there is a carefully observed and described outline of a cliff, a hilltop, a building. The two elements – the figure and the tones – seem to crash against each other like waves on the shorelines which so inspire the artist. And that movement continues at a deeper level. Am I looking at a line drawing which is threatened by a sea (sic) of tones and hues? Or am I presented with a celebration of medium, into which an alien form intrudes brusquely, recklessly? Just what am I looking at? Now you see it …

Within the scope of artistic response, both the abstract and the figurative have their place. But in these works, they don’t ‘speak to each other’ easily; it is hard to say whether they complement or challenge one another. One is reminded in almost every piece that one way of seeing never completely excludes others; one way of seeing is always at risk of turning into another. They remind us that we make choices about how we see.

If form is the first area of discord in this exhibition, then the palette Cathcart brings to his work is the second. Amongst the blues and whites and earth tones lavishly applied, flash streaks of day-glo pinks and greens and yellows. We may have become used to artists exploring constituent tones in a landscape or still life, but even so these strident electric colours are clearly out of place. Or are they? Has the artist seen something we have missed? It is tempting to see in those flashes the flags, the life guards, the surf boards and surfers who certainly display them. Maybe that is what we have here: a vestigial reference to human activity (otherwise largely absent from this exhibition) shown as trailing light; a time-lapse capture. But the sense of discomfort isn’t easily assuaged. Maybe the artist really has seen something which is invisible to us. Now you see it …

At one level, art is the re-presentation of the world via the artist’s response and a given medium. Good art, though, engages us and shows fresh ways of seeing. Even better art challenges us to consider how we see. This is what we find in this exhibition.